Both nutritionists and environment scientists warn of the implications of the present high rates of meat consumption in many parts of the world, while growing percentages of consumers perceive meat consumption in a negative way. Vegan goods provide a great many nutritional benefits and are much more sustainable than meat.

This has encouraged a rising number of consumers to challenge meat consumption and the impact our diets have on animals, the environment and our health. This also represents the increasing need for meat alternatives. Most well-known supermarkets also sell a wide range of plant-based sandwiches, sausages and other meat alternatives, based on legumes, fruits, cereals, and other ingredients. Similar to beef, Food substitutes offer many advantages. Of starters, the vegan varieties of burgers are cholesterol-free and typically have fewer calories and less fat than comparable meat-made burgers.

Tofu is a perfect replacement in recipes for meats that include pork, chicken , beef, and seafood. It’s made from soybeans and has a high protein and calcium content. It is especially valued as a low calorie protein source.

For years, Tofu became a staple of Asian cuisine. It is also flexible, as it absorbs aromas from spices and marinades with ease. Tofu is available today in numerous variants, including spicy, smoked and marinated versions, flavored with various herbs and spices.

Tofu is made using soaked soybeans, mashed with water to create a smooth puree. The puree is then filtered away, removing the solid, fibrous constituents from the liquid material. The liquid is then heated and curdled to just below the boiling point, thereby solidifying the liquid substance in a manner close to how cheese is made.

It is very cheap and simple to cook. It consists of dehydrated soybean, which can be used as a meat substitute in virtually any platter until combined with water. Most commonly, soya is sold as thin, cutlet, or cup. As with tofu, it is possible to incorporate marinades and spice mixtures to produce nearly every aroma or flavor.

It is an Indonesian staple food made from fermented soya beans. Similar to cheese production, tempeh harnesses the influence of special bacterial cultures that break down the protein in the beans and make it especially available to the digestive system. Having an average of 20% protein and a high fiber content, tempeh is suitable for a healthy diet.

Seitan is the protein that is found in wheat. Simple to season and cook, and with a meat-like consistency, seitan is a common meat substitute, a staple ingredient in Asian cuisine for millennia. It is made by soaking the dough of wheat flour with water until all the starch granules are separated, leaving only the gluten of wheat. Boiling, frying, or steaming the raw dough acquires its meaty texture. Seitan is used in a wide variety of products from cold cuts, sausages, and cutlets. Seitan powder is easily and readily available as essential wheat gluten in many countries, and is suitable for making vegan sausages or cold cuts at home.

Whilst it is a time-consuming operation, essential wheat gluten can be made from wheat flour at home. Because seitan is basically wheat gluten, it is not appropriate for those suffering from celiac disease or those adopting a gluten-free diet.

Just like soybeans, lupins are legumes rich in proteins. The production of lupins, considered one of the meat substitutes of the future, is especially viable and easily feasible in Europe, which has a perfect environment for it. The lupin-protein products include cutlets, doner kebabs and sausages. This can be sold at most organic grocery shops, vegan supermarkets, and online retailers.

Spelt is a wheat crop, and one of the oldest produced plants. Green spelt is the term for spelt grain harvested during semi-repeat. It is roasted and dried until processed, to increase its shelf life. This method adds an especially intense taste to the spelt and makes it easy to digest. Green spelt has a particularly high concentration of B vitamins and a significant amount of magnesium and phosphorus. Bruised grain and green spelt semolina form a strong base for vegetarian / vegan patties, cutlets and meat(free)balls. Green spelt can be found in organic health food stores and supermarkets in the shape of partially cooked cutlets, bruised grain, or semolina.

Oat flakes are an excellent source of zinc and iron, and are available at every store or sale at an reasonable price.They can be used to cook delicious cutlets. They consist of fried oat dough mixed with vegetable broth, any fat, rubbed carrots or courgettes, and usually other proteins of vegetables. Oat flakes provide a slow and steady source of complex carbohydrates that can reduce hunger, thus promoting fat loss. Oats are an increasingly favored source of protein and are also sold as ‘pulled oats,’ an alternative to pulled pork.

Burgers made from black beans offer a common, healthy and delicious alternative to ready-made goods and fast-food restaurant fare. Black beans are rich in fibre and protein. The darker the bean, the more it produces anthocyanins. This natural colorant in vegetables is a strong antioxidant.

Because of its favorable nutritional quality chickpeas can be an essential part of every diet. These provide more protein than other forms of beef, have a large portion of iron and provide a comparable calcium content to that of milk. Chickpeas, rich in fiber, are very filling and are the main ingredient in many Middle Eastern dishes, including falafel and hummus.

The humble pea is one of the other plant-based protein options that have lately carved a niche for themselves as meat substitutes. Currently available on the market, pea based items are produced as a mixture of vegetables, pea protein, and various spices. They are high in protein and magnesium, and low in fat and carbohydrates. Although meat substitutes made from pea protein are becoming increasingly available, they are still found in vegan-friendly supermarkets for now.

It may be a balanced tropical fruit but its texture and mild taste make it a great meat stand-in. If you want to make the jack-fruit chewier, simply roast it for 15 minutes on a baking sheet. Apart from a faint sweet taste, the jack-fruit is almost a blank slate, and you can use whatever spice and flavor panels you want best – Indian, Mexican, Chinese, and so on.

If you want that savory, meaty flavor, Umami, mushrooms are the way to get there. They have a lush, earthy, and meaty flavour, particularly cremini or mushrooms from Portobello. They are full and nutritious and can supplement meat in any recipe.

TVP or textured vegetable protein is a product that is cheap and easy to use. This is soy dehydrate and you can do just about something about it until you rehydrate it. It comes in bits, or chunks. You can use it to make cutlets for ground beef meals, or tasty burgers and meatloaves. Often it is also classified as TSP or textured soy protein.

It uses several different flours and proteins to make a vegan meat that has a texture similar to seitan and can be flavored in many ways. You can serve it as slices, rolls,cutlets, chunks or links and finds use in lots of recipes. It also has another name, V-Meat.

Since the advent of veganism lentils have also been a stand-in to beef. Lentils are heartburning and can easily replace ground beef. Lentils come in a variety of colors including orange, red, brown, and black. They easily cook up, are inexpensive and a small amount goes a long way.

There is too much to pick from: green beans, kidney beans, pinto beans, aduki beans, navy beans , chickpeas, split peas, peanuts and green-eyed peas, to name a few. Beans make hearty soups, stews and chilis, but without the meat would taste meaty.

Many meat-substituting crops include eggplant, cauliflower, carrots, beets, and coconut.

Also, if you have interests in learning about the Locusts: threat to agriculture, do check our article.. 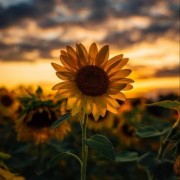 Radiofrequency drying- A promising technique which still needs to be explored